I really, really enjoy field work. Although I can often be found at my standing desk wearing my data analysis nerd glasses, my big floppy field hat remains dear to me, and never too far out of reach. 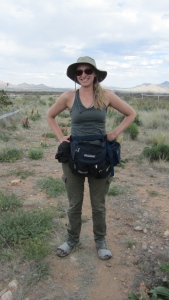 You can never have too many fanny packs for field work! These ones are full of millet for baiting our small mammal traps.

The Portal Project long-term field study is an exciting and fantastic place for ecology research. Located in southeastern Arizona, near the Chiricahua mountains, it is extremely diverse for a desert site (21 rodent species!) and has large variation in annual plant germination (ranging from zilch to > 35 species), which makes every trip different. I started working at the site as a graduate research assistant with Morgan Ernest – first taking on the monthly rodent surveys, and then the twice-yearly annual plant surveys. The site remains one of my favorite places on the planet and from monsoon rains, to rattlesnakes, to a horribly lost coati, it always has a few surprises for visitors! And for all you lucky readers, the Portal Project’s long-term data is freely available (1977-2002)!

These days, I spend most of my time on the computer analyzing other people’s data, skyping with far-flung collaborators, applying for jobs, and trying to keep my inbox from taking over. But as I’ve moved into scientifically new roles post PhD, I find that trips to the field keep me grounded in real ecological systems and also play an important role in reminding me why I became a scientist in the first place. Although I actually enjoy programming and data analysis, I was first drawn to science by the realization that I could make a career out of observing nature and playing in the dirt. Who doesn’t want to do that? For me, getting into the field is a good way to mentally reset, get up close with nature, take a few days away from technology, and enjoy being in the outdoors. 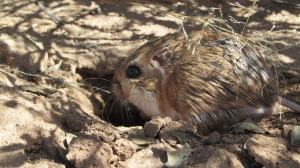 A kangaroo rat digs a hole after being captured and released.

Post PhD, I’ve been lucky to remain involved with data collection for the Portal Project at least once a year, and for my first postdoc, I spent a month in the Chiricahua mountains traveling between flower patches to observe nectar production and hummingbird migration – now that’s pretty amazing field work! And a few times a year, when I can justify taking a few days away from my current projects, I enjoy traveling to and learning about others’ field studies. As field ecologists, we often get to experience nature in a way that other’s can’t or are unlikely to, and it is truly fascinating. We see small things up close and in fine detail – insects, spiders, and tiny desert plants – and we have the opportunity to capture and handle wild animals (with the proper permits and IACUCs!) – small rodents, delicate hummingbirds and even large carnivores!

A few weeks ago, I flew to Arizona to help out with the annual plant census, monthly rodent trapping, and to begin a new phase in the long-term experimental manipulation (for updates, check out the official Portal blog). We captured lots of (usually uncommon) grassland rodent species – Sigmodon, Baiomys, and Reithrodontomys in addition to our more abundant desert rodent species – kangaroo rats, pocket mice, and pack rats. The annual plants were in full bloom, with a boon year for Nama hispidum (banner photo). The experimental plots were updated with new fencing and patches and many hours were spent shoveling dirt and cutting wire hardware cloth. We worked hard, ate well, and slept under the stars. In summary: it was great!

We captured so many cotton rats (Sigmodon fulvivener and hispidus), which are grassland species!

Chaetodipus penicillatus (desert pocket mouse) is a more typical desert-adapted species, that we commonly capture at the site.